I intend to keep this blog updated more than the old site here, so to start with is a brief overview at my first weeks here in sunny (haha) Southampton.

My course is a novel and new one, Web Science (Computer Science) BSc (hons). No one has yet graduated in this course, it’s only the second year that it has run.

Now you may be wondering what on earth is web science? Or why on earth doesn’t he just do comp sci, it has it in the name right?! Firstly, I do quite a lot of computer science, this semester I’m doing Programming I and Foundations of computer science. These are the main comp sci modules that you would do if doing straight computer science (the others being professional development and systems). However, my other two modules are Information, Technology and Social Change (yes I had to look that up) and Principles of Microeconomics. The first is one of very few Web Science  modules (for all 6 of us) that introduces some of the issues and areas of the study on the web (similar to the free, not the £9,000 I pay, MOOC that Southampton has just started running for the 3rd time http://www.southampton.ac.uk/moocs/webscience.shtml). The most novel thing here is the sociology as I’ve never studied it before (coming from Maths, Physics and Economics). This has been excellently taught so far by Professor Susan Halford who is also a director of the web science institute here in Southampton. Other topics include the history of the web and precursors to the web. Principles of Microeconomics is an optional module (like Foundations of Computer Science) that is taken with all the economics/accounting and finance/almost everything students, in fact, I’m the only web scientist who is taking it. The reason I chose it is mainly due to me enjoying economics at A Level (my best grade is in economics). Fun fact, I was at one point thinking about doing Computer Science with/and Economics until I realised of the 3 or 4 places in the UK that did it, I didn’t want to go to. So it’s nice to do something a bit less computer based. The core Programming I and Foundations of Computer Science are very much as you would expect. Programming I is a fast paced introduction to Java in a very object-orientated way, so if you are about to start studying that here I recommend trying some programming. It’s only week 3 but we are already onto constructors and encapsulation so if you’ve never programmed before you’ll have to spend a lot of time on it. Foundations of comp sci is very maths heavy, so further maths (even only at AS like me) will really help with the matrices etc. If you haven’t done it then look up matrices and matrix multiplication before you get here, it’ll really help. The first section is linear algebra (Gaussian Elimination, finding inverses of matrices etc.) and the second is logic and sets. More info on those to come as I learn it.

One question I’ve skipped above is ‘What is web science?’, that I know many of you will be asking. Web science is incredibly new (in terms of an academic field) proposed by Tim Berners-Lee and other (such as Professor Dame Wendy Hall) to study the effects of the web on society (and society’s effect on the web). In this paper (http://eprints.soton.ac.uk/266555/ it’s slightly technical in places but worth a read) they set out plans for a new area of study around issues to do with the web. The web is only 25 years old but has massively changed our world, but how did this network for physicists change the world? At Southampton there are 80 post docs doing reasearch on such topics. Non of which have web science undergraduates (my course is only 2 years old and is the first in the world). They are taken from both computer science and the social sciences, hence the interdisciplinary approach to web science. So it’s an interesting area with lots of big names, and it let’s me choose more optional modules than I would otherwise and from all over the place (I could be doing politics, sociology or criminology modules at the moment). 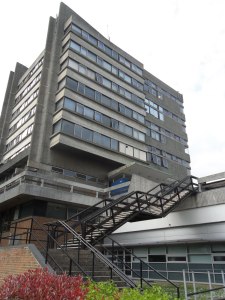 Moving from the academic, Southampton has been a really good uni to study at so far. The reputation is excellent, the campus is pleasant (apart from a few notable concrete monoliths) and the people are great. Connaught where I live is pretty good, some of the fittings are a bit dated and the food could be better (but boy, it could be worse,  cooking?!). But, a new chair is coming very soon! Yay! Most importantly though the people are friendly and the beer at the bar is cheap. We’ve got a common room with ping pong tables, a computer room and a snooker room. The latter, though, is awful. The felt on the table is ripped, there are no tips on the snooker cues and the balls have chunks missing. Not only that but you have to walk all the way to Monte reception to book at slot, booking! It’s already terrible.

The CU here is great, a real positive (not that there are many negitives, maybe £2.50 for a washing machine!). The main meetings are on Friday nights, which can clash with some other events. Churches in Southampton are excellent so far, the CU is pretty good in organising group to go along (a so-called ‘Church Crawl’) to help you find one that you feel called to.

Anyway, this is a long post. I can’t promise all of these posts will be this long but I hope it’s not too boring and gives you an overview of my experience here.